skip to main | skip to sidebar

DYB
Finally, I've come around to finalize my DYB project.
It has taken some time to get here. The reason is; I just have not prioritized this project. It is regrettable that I did postponed my BYB. Now it has become the most beautiful quilt. Thanks to all the lovely ladies who has contributed. 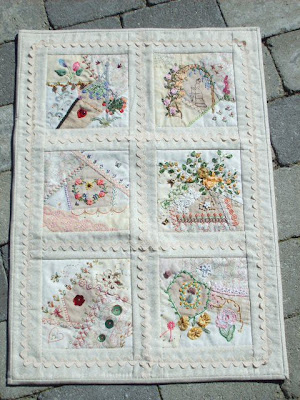 Now that I have crossed the finishing line on this one, maybe I should think about jumping another stitchery round robin. Anybody who knows of such project?

Of course I did. But this time I wanted to be constructive. Not just by some fabric here and there, just because I liked it. No, this time I had told myself to be smart. Buy fabric I like, and make sure they fit together.
Did I reach my goal?
You be the judge of that :o) 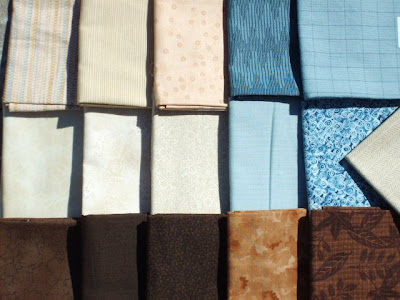 I loved these fabrics. They are meant to go together, in a project; witch will be published in a book that’s released in a week or two. Looking forward to receiving the book so I can start cutting these fabric. 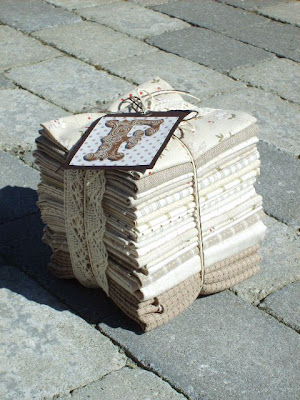 In the same book there will be instructions to make a quilt from this pile of fabric. Aren’t they just adorable? 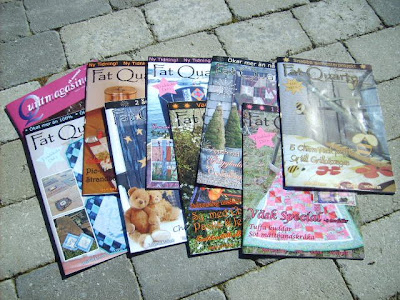 Last, but not least; a pile of quilt related magazines. I love books and magazines. They are my kind of low-fat-candy, fits prefect with coffee and chocolate.

NQT weekend
Finally I’ve figure how to work the combination: computer and internet here in Gothenburg.
…..It isn’t easy being stupid :o)

I thought I were “not allowed to show you pictures” from the exhibitions. Therefore I am not going to show you, I’ll just send you off to May Britt’s blog. She is more into the rules than I am. Go and have a look at her blog. She got pictures of the winners of the competition.
Congratulations to the winners. Their work is absolutely stunning.
Anyway, I have enjoyed some beautiful days here in Gothenburg, such lovely ladies, beautiful quilts, stunning shops and great friendships, and then continuously a beautiful town, more friendships, shopping, discourses and workshops. I could go on forever.
As soon as I get all my pictures form this weekend into my computer I’ll show you pictures of “all my other experiences” thru the last couple of days.
I’ll bring you ceremonies, presentations, courses, exhibitions (if I am allowed), happenings, friends and a visit to the Botanic garden.
It has been a great weekend. Now I need some sleep for the journey back home. I got some hours of traveling before I get home. (I’ll keep my camera ready to go if I need it this time)
I’ll give you more pictures from my extraordinary weekend next week.

So long; love you all.

Etiketter: NQF
Beautiful scenery
Tonight I’ve traveled the south of Norway. I have spent almost 6 hours going from Klepp at Jæren to Sandefjord. It is the most beautiful trip I have done on my own. What an experience.
I’ve been driving during the night. I started at 0100 and have driven approximately 60 kilometer. There were almost no other cars in sight. A lorry now and then, but is has been a quiet trip.
Even thou it is night and people are sleeping, nature is not. I have seen some spectacular sights this night. Unfortunally my camera were not available and loaded with batteries and memory card, but my hard disc (read brain) were up and running.
I’ll try to picture it for you:
Deer is not asleep during the night. They are out there feeding. Half way on my trip I lost control of counting them. There were too many. Deer’s are pretty common in Norway, but the amount I’ve seen this night is unbelievable. On two of the occasion’s, one were standing in the middle of the road. The first on ran into the forest immediately as I came along, but the second one did not. It was just standing there; looking at me. I stopped the car. I could not hut it in any way. It was big, standing there in front of my car. I believe we were steering at each other for some seconds before it walked into the green and disappeared. What a strange feeling.
It had been a calm, curious and quiet meeting for both of us.
And I’ve seen an eagle. It is a mighty sight. The bird was big and elegant, landing in a treetop next to me. Luckily I had stopped, to look at the beautiful surroundings at a bus stop in nowhere land.
Somewhere between 4 and 5 this morning the sun raised over the treetops. The fog was lying like quilts over the waters, rising softly to the sky. The light from the sun sparkled in the billions small water drops in the forest. Sometimes it looked like angels were coming down to earth.
Approximately 50 gees lifted from a field and flew low and crossed the road. I had to slow down not to drive into them. My husband would scream “Shoot!” since he is a hunter. To me it was a spectacular sight.
My trip to Stockholm was just amazing. Wish there were somebody there to shear it with.
Well I just tried to picture it for you. Hopefully you enjoyed it.

My last post
A lovely lady sent me an e-mail regarding my last post.
My thanks to her for addressing the question:
Not sure how to take your last post on your blog, if it is sooooooo boring then why take part in the give aways?
Sorry if my English is so poor it is resulting in an opportunity to be misunderstood.
I love give aways. Both participating and arranging.
What I find boring is when I want to spend time to pop around in blog land and discover “all of you” tell about the same giveaway.
It is more fun to read about quilting, gardening, cooking, family life, friendships and your everyday life.
It is fun to “stumble” into a giveaway now and then and participate. But all this “you need to”, “tell everybody” and “do something special....”. Sorry, but that’s the part of it, I find boring.
It is almost like “Look what I’ll give you for present, if you invite me to your birthday party”

Giveaway with no criteria is more what I like. Tell about it if you fell like it. That’s more my style.
Of course I appreciate visitors to my blog, but I am not going to seduce you by offering nice prices.
I love to blog, and appreciate others who do the same.

Any body else out there with reflection on this issue?
I’d love to hear from you.

Counters and Give Away's
Once upon a Quilt is having six fat 1/4's to give away. All you need to do, is pop around and put a comment and tell her what was the best tip someone gave you for patchwork and quilting. And of course tell it on your blog, like I just did.

"Everybody" is celebrating something with a Give away. I have decided not to get attached to all these giveaways. It is soooo boring to read about the same giveaways at several of my favourite blogs, and I find it a bit of childish to. Sorry....
Then again it is fun to give away presents.

Therefore I’ve decided to do something else.

During NQT this weekend, I’ll be blogging and post a lot of my impressions. Give you pictures and stories.
I’ll get a present for at least one of my visitors who comment on my blog during these days. But you do not have to blog it. I am happy people pop by, and enjoy my writings and pictures, without being "forced" to tell everybody they love to win in my give away.

Hopefully during this weekend my new counter will be busy.
Resulting in some other celebrations.... maybe...
Lagt inn av Nina In Norway kl. 6:36 AM 4 comments: 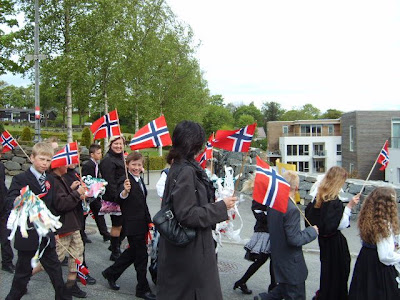 The smiling boy in the picture is my DS Glenn André.
Hipp Hipp Hurra! 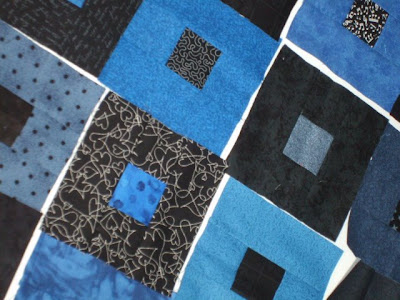 I have received all the blocks in this swap. Now I have started to arrange them. It is rather easy when all the blocs are there. And such varayety in the fabric. I believe nobody og the 9 members in the group used the same fabric. A gerat inspiration.
Maybe I’ll find the time to assembly them as well before I need to pack my suitcase. In just a few days I am off to the Nordic Quilt Convention in Gothenburg, Sweden.

Sale
I routed my day so I could pop by my favourite quilt store last Friday. There were actually a reason for doing so, but as soon as I got there, it slipped my mind.
Kaktus Quilt was having a SALE. There were ladies in a longish queue.
Fabric at 10 NOK each meter is unbelievable. That would be something like 1.5 US$. Compared to ordinary Norwegian prizes at approximately 200 NOK pr meter ( 35 US$ ! ). This sale was next to give away.
I ended up with a pile of fabric. It was so cheap and fun it was an easy thing to; by the rest of the blot. This resulted in a buy of several meters, but who is counting? Hopefully they come in handy some day.

Greetings to Liz and Rita:
Thanks for the fun.
Lagt inn av Nina In Norway kl. 2:59 AM 1 comment:

Second lap in this series is done. This one came to my house a bit earlier than it should. It gave me time to figure out how to solve the challenge. I had to go shopping for grey fabric. Grey is a difficult colour. I found Syglad’s choice of colour a bit “polluted”. Anyway, I have solved this one too, and are pretty satisfied with the result.
Can’t show you my solution to this one either.
I am collecting these pic's to the end of this project.
One less, on my May list, of "to do's".
Now I am of to do some gardening .....
Lagt inn av Nina In Norway kl. 1:47 AM 1 comment: 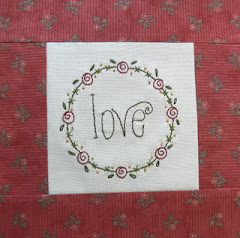 One Project a month Challenge 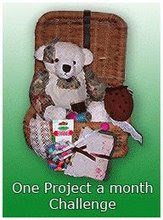